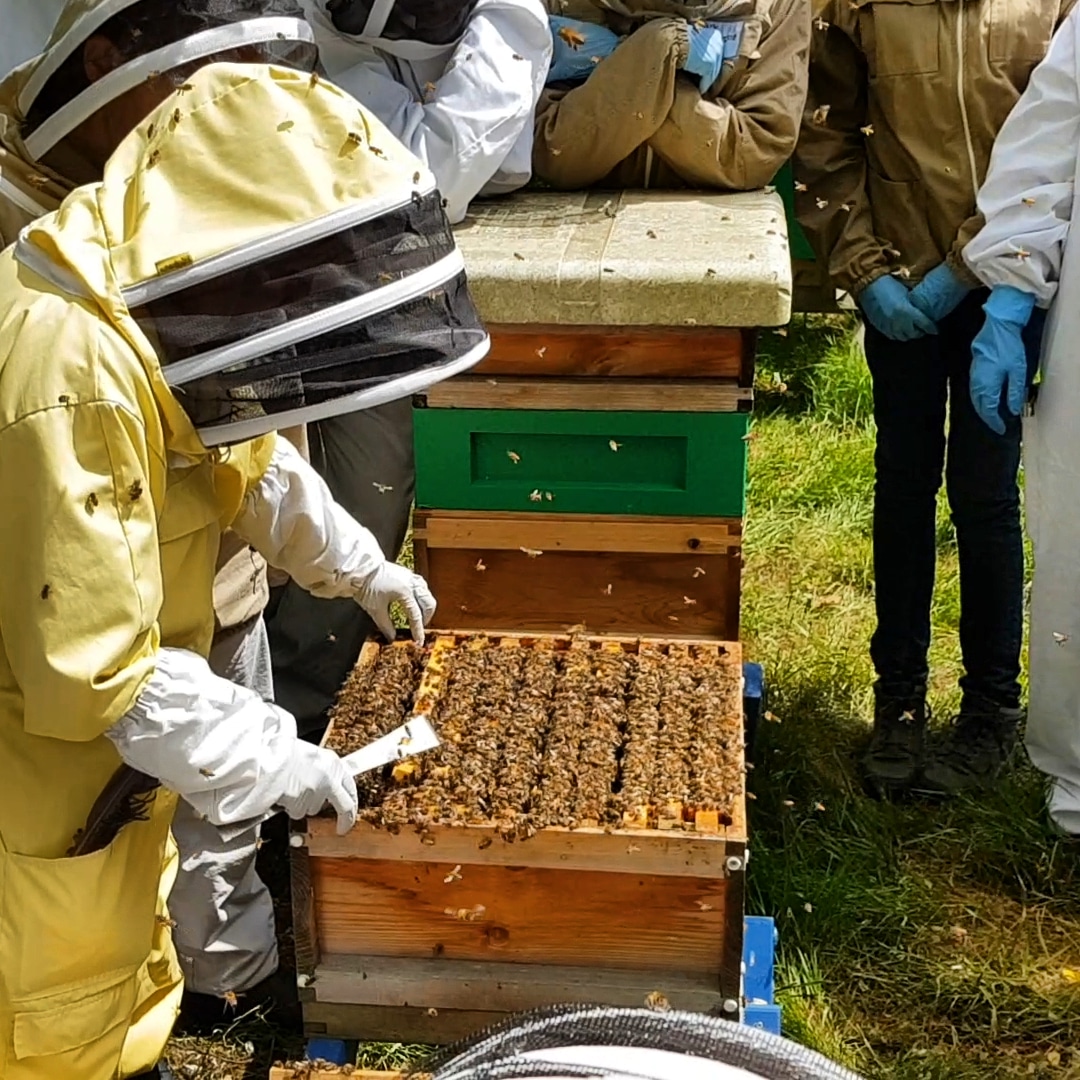 Swarm Management - Understanding the Process (1 of 3)

In this article we will look at swarming with a view of understanding why the bees try so hard to swarm, what can we do to delay this urge and look at some inspections methods to employ during peak swarming periods.

What is a swarm

So first things first, what exactly is a swarm?  All mature honey bee colonies have a natural urge to reproduce.  Bee hives reproduce by swarming.  When bees swarm they divide the colony into a number of separate parts, each  part with a queen.  Think of it as the colony having offspring.

At the start of the beekeeping year in spring, the colony first needs to build up in size.  It does this by foraging for gradually increasing amounts of pollen and nectar and stimulating the queen to start laying in earnest.  Its amazing to see how quickly the colony builds up.  Once they have built up past a certain size and strength they switch from build up to reproduction.

Watching a swarm is quite an amazing site.  Maybefor some people not what they want to see but impressive.  The swarm, once it leaves a hive may contain 50-60% of the bees from the hive (primary swarm) and contains a mix of workers, foragers, a queen and a small amount of drones, in other words, it is a fully functioning colony able to setup a new home somewhere else.

The first swarm to leave is known as a prime swarm and usually goes with the hives resident queen, subsequent swarms (caste swarms) leave with newly emerged virgin (unmated) queens depleting the hive further.  Unless we manage the swarming process our hive can have numerous swarms issuing, leaving us with a very small colony.  This is something most beekeepers wish to avoid.

I named this article swarm management and not swarm control for a reason.  We cannot control or stop the bees from wanting to swarm, we can however manage the process by understanding what the bees wish to achieve and working with that urge.

This is a question often asked.  Why do we even need to manage swarming? why not just let ‘nature’ take its course and leave the bees to it?

As beekeepers we have a responsibility to practise good husbandry, and managing swarming is one such practise.  Swarms can cause a nuisance, especially in urban areas by landing in awkward places, such as lamp posts (see picture) , inside chimneys, in your neighbours garden, etc.

Many beekeepers also wish to keep the colony strong to ensure a good foraging force to bring in available nectar and to take them through a long cold winter when / if it arrives.  Also some queens produce such good colonies that we really do not want to loose our valuable queen.  There are of course other reasons but these are some of the main ones.

Honey bee swarms are quite a sight, they are quite loud and can look intimidating, however they are rarely aggressive at this stage as they have no hive, stores or brood to defend.

Most beekeepers check their hives every week during the peak swarming season, during these checks we need to be aware of certain items which may give us some indication of their intent to swarm.

Correct time of year - In our climate here in the UK (London and the South East) the peak swarming time is between April and end of July.  This however is a guide and the best indication is the season and when it started.  In  2019 some hives started preparing to swarm as early as the end of February.

Rapid expansion of the brood nest with honey being stored in the honey super.  This shows the colony is growing in strength and has enough stores to take with them and enough to leave behind.   When you see this during peak swarming time start to look carefully for swarm cells.

Much Drone brood being produced.   As above this shows the colony has build to a certain level of strength and maturity that it can now support drones.  Drones take a lot of energy to produce and are usually produced in earnest when the colony wishes to propagate its genes. Although a colony will not interbreed, the production of drones indicates the time is right for swarming.

Back filling the brood nest with nectar.  This is one way for the bees to start to restrict the queen lay.  They do this before swarming to slim the queen down and thereby making it easier for her to fly with the swarm.  A Queen in full lay is large and heavy.

Confinement during period of bad weather - this catches out a lot of people.  If during peak swarming season the weather is unfavourable for the bees to fly in (cold / rainy), you should suspect they are stuck indoors making swarm preparation.   Remember the timings we learnt earlier ?  It takes the bees 8 days from the time a fertile egg is laid to the queen cell being capped, and its at the capping stage the swarm leaves the hive.  If they have been stuck indoors they may be making cells and could swarm as soon as the weather becomes suitable.  Remember to check your hives after periods of confinement.

Queen cups start to be polished.  Queen cups are small acorn size wax cups the bees create at all times of the year.  They start off small and quite matt looking (like old wax) and at this stage no action is required.  However once swarm preparations start,  the bees begin to polish the inside of the cups, the queen lays an egg in the cell, and the bees start to fill the cell with Royal Jelly.  In other words if you see cells where the inside looks polished and shiny, start investigating further.

Eggs in Queen cups.  If you find the queen has laid an egg inside of a queen cup, these are now what we call a queen cell and means the bees most likely wish to create a new queen (for swarming)

Larvae is seen in queen cells.   This is now what we called a ‘charged queen cell’ and indicates the bees have made up their hive mind to swarm.  Remember the timings again.  3 days as an egg, 5 days as a larvae before the cells is sealed on day 8.  From this you can understand you potentially have a maximum of 5 days to do something before a swarm leave.  In fact if you find a larvae in a queen cells its important to do some sort of swarm management immediately.   When the bees wish to swarm they create a number (10-20ish) queen cells of various ages so some larvae may be older.  The important message is do something immediately if you find larvae in queen cells.

Capped queen cells are found.   This is something during swarming season we do not want to find before we have had time to act.   Capped queen cells in a hive usually means the hive has already swarmed.  At this stage you will need to carefully examine the colony to see if the resident queen has in fact left and to understand your next steps.  A great resource is the manual written by Wally Shaw called ‘ There are queen cells in my hive - what should I do?’ - Link here

Methods to to delay Swarming.

Although we can't stop swarming there are methods we can employ to delay swarming. Here are some options to be employed.

Space for the queen to lay.  This is one of the methods to be employed early in the year.  Some colonies go into spring with such large amounts of stores it restricts the space available for the queen to lay.  It is of course important to ensure enough stores remain, however if excessive amounts are found, these can be removed for reuse later and replace with drawn comb or foundation.  A colony needs 2 full brood frames of stores per week to ensure enough is left if you deploy this method.

Space to process nectar and store honey.  Once the colony starts to build up in spring and the nectar is being brought in, the bees need adequate space to store the nectar away from the brood area.  If extra space is not provided this may encourage early swarming.  Remember to add supers to your hive when required.  As a general rule for a National hive you can add your first super when the hive is two thirds full of brood / bees.  Remember to keep ahead of the bees' requirements.

Age and genetics.  As the queen ages her pheromone production decreases, pheromones are quite complex but one function is to inhibit the production of queen cells.  With older queens, swarm cells may be produced earlier than expected.   Aim to keep young queens to ensure the queen pheromones are spread amply around the colony.  In terms of genetics some colonies tent to swarm at the drop of a hat.  These colonies are to be avoided. In a good year or with a prolific queen even young queens may wish to swarm.

During swarming periods (peak between April and End of July in the UK) its necessary to be extra vigilant around regular hive checks.  There are also some pointers to note;

Bees hiding Queen cells.  Yes the bees do have a tendency to hide queen cells in hard to see places on and around the brood frames.   When checking for cells make sure you carefully examine all the nooks and crannies and gaps in the frames.  Cells are easy to miss.

Shake bees off brood frames - In order to find all queen cells when performing any swarm management technique it is necessary to learn how to shake bees off brood frames.  This is a good skill to learn and needs to be done correctly to ensure no bees are injured and can be done without excessively agitating the bees.  Ask an experienced beekeeper to show / teach you how this is done.  It is not necessary to shake all frames at all inspections, however if any signs of swarming are seen and you wish to be sure, shake frames else it is guaranteed you will miss queen cells.

Weekly checks - If the queen is not clipped, then hive checks must be done on a regular weekly basis.  If we go back to our queen development timelines we know from the time a egg is laid /placed in a queen cell to the time it takes that queen cell to be sealed (and the swarm to potentially) leave is 8 days.    That is the reason we need to do regular 7 day hive checks during swarming time.  I told you development dates were important to understand (re-read about the timings here - Part 1 and here Part 2)

Know swarm management technique and have kit ready - The next article will go into detail about what to do when swarm cells are found.  In order to avoid confusion, once cells are found it is important you know your chosen swarm control method inside out and to have the kit ready should you need to perform the process.  Personally I prefer the nucleus method of swarm control and have a nucleus box near each hive full of frames for use when I discover swarm cells.  This way there is no panic and action can be taken straight away.  I would highly recommend you have all the kit ready before swarming season starts and keep it within easy reach.

In the next article we will look at how to perform the Artificial swarm and the Nucleus Method of swarm control.  These are probably the most used methods (in the UK) and I would advise everyone to learn them.

Remember to perform regular inspections, keep ahead of the bees, keep hive records and know what to do when swarm cells are found.  Have fun….